We have moved please view our new website here
We aim to reply to queries within 14 working days. Ensure you look in your junk mail for a reply.

Guided Tours for Members with a current membership contact the Friends to book your guided tours
stating which cemetery tour, date and time , name(s) and your contact details.
Once page has opened, ensure you click on more ( top right corner ) then contact in the dropdown menu.

Thank you for supporting the Friends of Key Hill Cemetery & Warstone Lane Cemetery
Raising funds for damaged and broken graves and caring for your ancestors resting place.

An inquest was held in Birmingham on 6 November 1940 of  five people  were suffocated by a fall of sand when a wall of sandbags collapsed on them whilst they were sleeping in a public air raid shelter which was in a basement and had been reinforced by blast walls .
The victims were Shadi Mohammed age 39, Deborah Shadi Mohammed age 26, Gulham Mohammed age 37 , Hyham Borsook age 30 , Lily Borsook age 34 . All has lived at 9 Sutton Street , near Holloway Head, Birmingham.
A member of the party Shah Sha said that they were in the habit of  going to the shelter every night to sleep. On Friday night the six of them went to the shelter at 7 o’clock . He sat talking to Hyman Borsook until about 11.30pm then he went to his place about 15 yards away to sleep. He saw that five people had settled down with their heads against the base of the sandbags. The following morning he was awakened at 6 O’clock and saw that pile of sandbags had collapsed and he dug out Mr and Mrs. Shadi with his  hands. All  five people well covered with dry sand .
James William Tucker, a shelter Marshall ,told the coroner that on this particular night they were about 300 people in the shelter he had never received any complaint about the blast walls and he thought there was no danger from them George William Fieldhouse an occupant of the shelter described how he was going up for awash in the morning before going to work and he noticed  he could see right into the street, he flashed his torch and saw some  legs protruding from the pile of  sand . He assisted to rescue the bodies. Medical evidence showed  all five  were dead on arrival General Hospital and that their death was due to asphyxia .
The corner doctor W .H .Davison in recording a verdict of  “Accidental death “ in each case commented there is nothing to suggest that’s such a happening could have been anticipated and that there were no warning  that it was likely to happen again . It should be made known generally that is sand bagged wall even undercover may not be safe after a couple of months. I should like to add but there was nothing this shelter Marshall could have done to prevent it happening .

An act of vandalism Poppy wreath set on Fire on War Memorial in Key Hill Cemetery in Birmingham Jewellery Quarter.

On Monday 25 March 2019 a visitor to Key Hill Cemetery spotted a youth setting fire to the poppy wreath placed on the War Memorial.
This war memorial had recently been cleaned.
The youth described as an Asian aware that he had been spotted quickly rode off on his bike and left the wooden crosses he was about to set fire to. 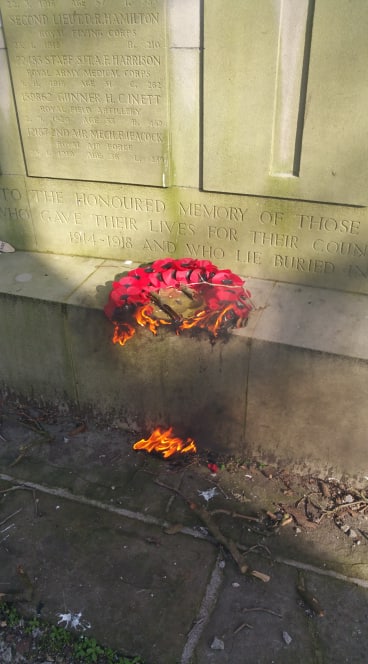 The visitor who captured this incident with their camera sent the image to the Friends of Key Hill Cemetery & Warstone Lane Cemetery.

It is shocking that this act of vandalism has taken place at the war memorial that was unveiled 9 July 1925 .
Both cemeteries remembers those who lost their lives in WW1 , WW2 , including  civilians of Birmingham who died during the  heavy air raids on the city.

The Friends of Key Hill Cemetery & Warstone Lane Cemetery are the only group who maintain the two historic Jewellery Quarter Cemeteries with regular clean up days . The Friends raise funds to restore the broken and sunken headstones in both cemeteries. This is achieved by attending history fairs, holding open days in the cemeteries, plus the Friends monthly guided tours held on the second Sunday in the month.  The Friends also assist the public with the plot number of their ancestor’s grave.
This Voluntary group  have contributed to the new grave of Constance Naden , who was a Poet and Philosopher and rests in Key Hill Cemetery. The Friends also contributed to Major Harry Gem’s new grave in Warstone Lane Cemetery. Major Harry Gem was the co-founder of Lawn Tennis.

Key Hill Cemetery opened in 1836 as a nondenominational cemetery (in practice nonconformist), and is Birmingham’s oldest cemetery, not being in a churchyard.
Whilst nearby Warstone Lane Cemetery that fronts Vyse Street is a Church of England Cemetery.
Pitsford Street separates the two Jewellery Quarter cemeteries.

A Birmingham lawn tennis enthusiast is appealing for donations in a bid to raise up to £10,000 to restore and maintain the Hockley grave of one of the game’s founding fathers.

Bob Holland, from Harborne, is planning to bring the grave of Major Harry Gem, who is buried in Warstone Lane Cemetery in the Jewellery Quarter, back to its original glory.

Bob, a retired advertising executive and lawn tennis fan, has spent many years researching the history of lawn tennis and the stories of lawn tennis pioneers Major Harry Gem and his friend Augurio Perera.

The pair played their very first outdoor rackets game, which anticipated lawn tennis, as early as 1859 on the croquet lawn of Perera’s home in Edgbaston.

Bob set up the Harry Gem Project with fellow lawn tennis historians Chris and Sue Elks to promote the role of Gem and Perera – along with the importance of Birmingham – in the history of the development of lawn tennis.

In 2011 they investigated the dilapidated grave site and vowed to restore it to its original glory.

“The cemetery was not well maintained for many years, so when we examined the grave space it was in a pretty bad state,” said Bob.

“Luckily, the engraving on the ledger stone is in perfect condition, because it spent many years buried under several inches of soil.

“It needs to be lifted and cleaned, and placed back onto new Victorian style grave architecture.”

A local company, Midland Conservation, will be commissioned to do the necessary work and, so far, Bob has managed to raise £8,000 of the restoration and maintenance cost via donations from the Lawn Tennis Association, All-England Club, Birmingham City Council, and the Royal Spanish Tennis Federation amongst others.

He’s now looking to raise the remaining £2000 from individual tennis, history and civic enthusiasts and has established a crowdfunding site at

“We know there are thousands of fans out there – in Birmingham and across the UK – who will be fascinated by the story of Gem and Perera and the birth of lawn tennis, and hopefully they will feel able to donate to the restoration of this little bit of tennis history.” 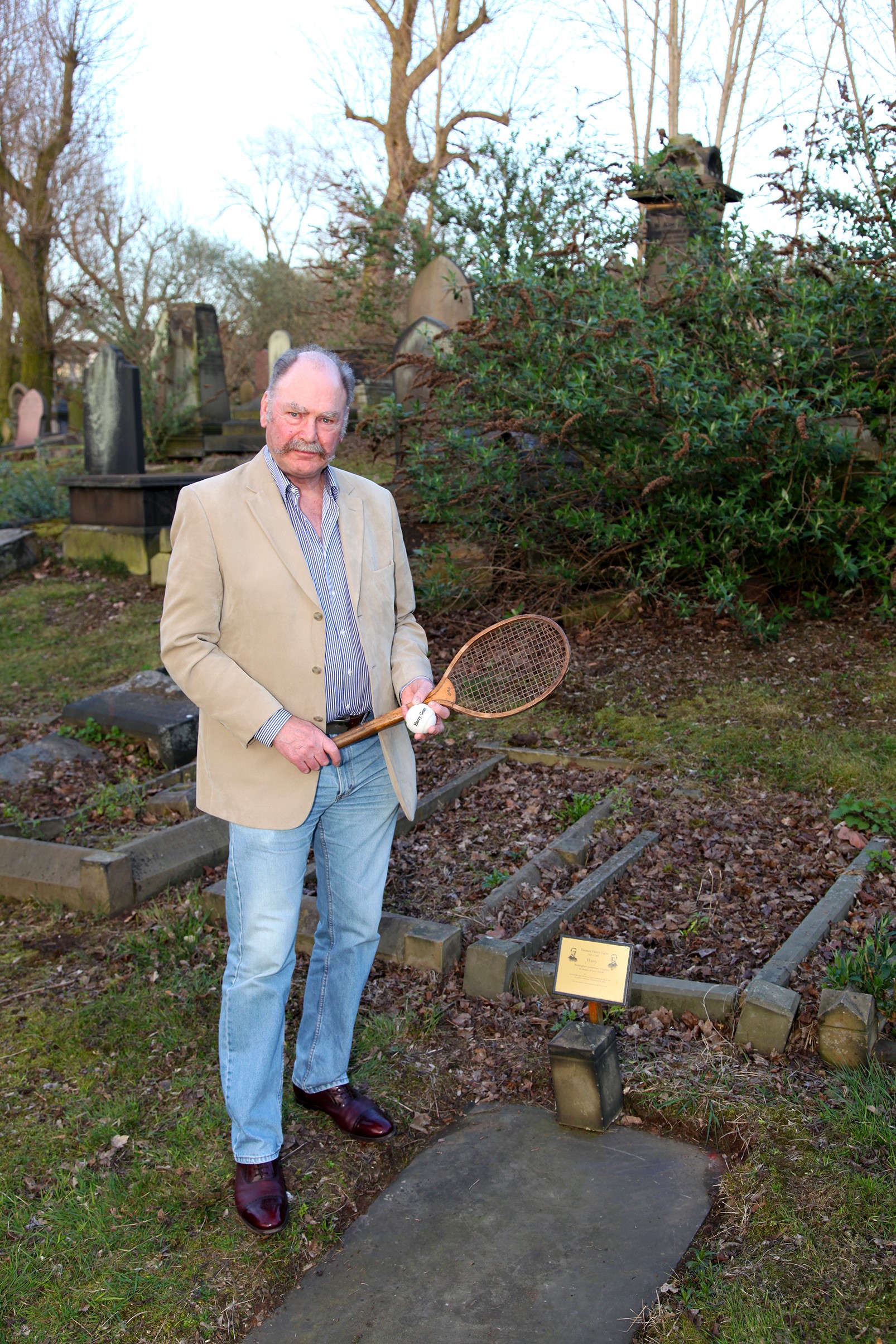